Worried that interlocks will restrict your cranes versatility?
Then choose Fassi Stability Control.

“While there are some within the industry that think that none of these systems should be mandatory, the fact is that legislation has been passed to reduce accidents and save lives. Like anything in life you ‘get what you pay for’ and the more sophisticated systems will be the easiest to live with and will provide the most versatility along with the optimum lifting capacity for the stability of the vehicle. Basic systems however may satisfy the legislative requirements, and improve safety, but restrict the machine’s versatility”. ‘Cranes and Access’ magazine editorial 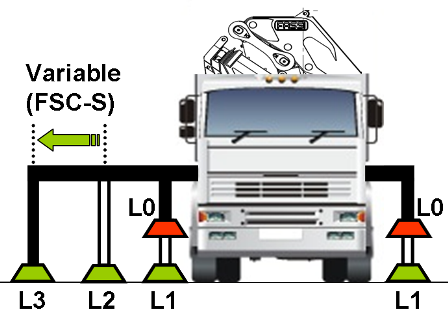 The Fassi Stability Control (FSC) system offers three interlock options in conformance with the new Machinery Directive 2006/42/EC which came into force on 29/12/2009.

The FSC system allows the deployment of each outrigger to be monitored by the crane’s rated capacity limiter (RCL) and reduces the lifting capacity in areas where the outriggers have not been fully deployed.

This means that it is possible to safely use the crane in space restricted situations where it is not possible to fully deploy the outriggers.

! Update May 2013: From the F295A.2 and above the encoder wires now run out of sight inside the outrigger beams.

A high specification solution offering the maximum possible operational flexibility. FSC-S is standard on the F245A e-dynamic to F1950RA he-dynamic & optional on the F80A e-active to F245A e-active provided the crane has been specified with radio remote control & hydraulically operated outriggers.

Why monitor both inclination of the truck & outrigger position?

During the development of FSC, Fassi extensively tested an inclination sensor acting on its own. This was not found to be a foolproof solution specifically in relation to the dynamics of a moving load. When a truck nears the limits of stability things happen quickly, particularly if the crane is working above horizontal.

By measuring the combined outrigger position & truck inclination FSC ensures total safety with much greater operating speed, lifting capacity & tilt than is possible with an inclination sensor on it’s own.

An inclination sensor on its own would also require a very stiff subframe to reduce tilt to safe levels. The extra cross beams required will add over a 1 tonne weight penalty on a 60tm crane installation. 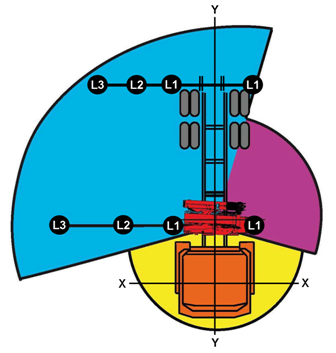 Need more information or to ask a question?
CONTACT US

Using FSC-S is easy when you know how

Familiarisation training at crane handover is essential to get the best out of FSC-S & operators receive a quick reference guide backed up by our helpdesk telephone support.

Setting up the crane in the X axis prior to the lift is the key & there is only one additional step that needs to be mastered. With correct operation FSC-S can be used to counteract ground slopes in excess of 5 degrees.

FSC-S was introduced in January 2011 & over the first 12 months in service Fassi listened to real world customer feedback & have incorporated a number of enhancements & tweaks to perfect the system.

All these improvements can be installed on any crane with FSC-S by upgrading the crane software to the latest 2012 version. This software upgrade is free of charge via our authorised service network. Call our helpdesk for more information. 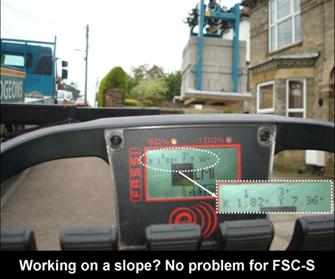 FSC can be customised further to accomodate crane operation with the outriggers off the ground (L0) to allow tipper or hopper operation. The incorporation of additional outriggers mounted on the front of the truck is also possible with FSC.

A cost effective solution for the Micro range and cranes fitted with the HO hydraulic rated capacity limiting device. The system authorises crane operation in a single configuration: all outriggers must be fully extended and in contact with the ground (L3).

A mid range solution for the F22A active to F245A active.

FSC-M2: The system authorises crane operation in three configurations for cranes with double extending outriggers: In addition to L1 & L3 as above, L2 outriggers extended to an intermediate position (first outrigger support completely extended) & on the ground (de-rated lifting capacity).