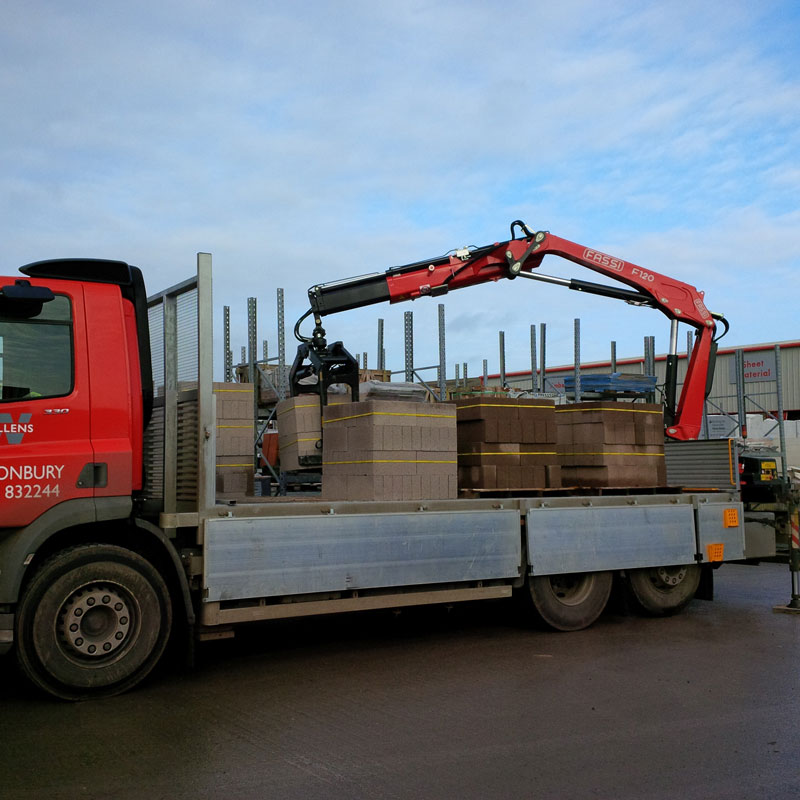 When is it coming in?

The key dates for the loader crane industry are as follows:

After these dates NO TYPE APPROVAL = NO REGISTRATION of the completed vehicle. WVTA is not applicable to used trucks.

What are the certification options available?

European Community Whole Vehicle Type Approval (ECWVTA) – This scheme is based around EC Directives and Regulations and provides for the approval of whole vehicles, in addition to vehicle systems and separate components. This certification is accepted throughout the EU without the need for further testing until a standard is updated or your design changes. This option will particularly suit volume manufacturers and/or those wishing to sell products across Europe.

National Small Series Type Approval (NSSTA) – This will potentially suit those manufacturing vehicles in low volumes and/or those not wishing to sell products across Europe. However, the scheme has a limit on production numbers, depending on vehicle category. Also approval to this scheme may not be accepted outside of the UK. This route is the most desirable for the FASSI Main Dealers.

Individual Vehicle Approval (IVA) – This is an alternative to type approval. The scheme is operated by the Driver and Vehicle Standards Agency (DVSA – formerly VOSA) and in Northern Ireland, the Driver Standards Agency (DSA). IVA involves an inspection of the vehicle by an examiner at one of five approved sites (Bristol, Derby, Edinburgh, Gillingham & Manchester). Inspection cost is £230 with a re-test fee of £46, plus of course the diesel & manhours required to move the vehicle to and from plus the paperwork preperation. Ability to test would also be subject to the availability of an appointment at the test centre with lead times likely to increase considerably from October 2014.

The advantage of National Small Series Type Approval (NSSTA) is that it allows business (almost) as usual.

Once a Whole Vehicle Type Approval is in place it enables a manufacturer to self-certify that vehicles they produce are in compliance with legislation. One of the benefits of being able to ‘self-certify’ vehicles is that extra costs and delays caused by having to take vehicles for an official individual inspection and approval are not introduced into the process of producing and registering subsequent vehicles. Of course, to realise these benefits, there is a need to invest sufficient resources to develop products and control systems, and so make it possible to achieve type approval.

What does it mean for customers?

In a nutshell it is likely to mean higher prices, less choice & longer build times. The industry will need to recoup the costs of type approval in higher prices to the customer. In the case of the IVA route there are likely to be delays at the five test stations due to the increased demand. There may be less choice of bespoke specification options contained within any given National Small Series Type.

For a good article on the implications of Whole Vehicle Type Approval from Transport Engineer magazine click here.

Need more information or to ask a question?
CONTACT US

What are FASSI UK doing to prepare?

FASSI UK are supporting our Main Dealers to obtain National Small Series Type Approval (NSSTA) to cover 90% of our installations on rigid base vehicles of categories N2 and N3.

In order to progress to a position where these Type Approvals can be achieved FASSI UK have engaged the ongoing support of MIRA’s Certification and Homologation Department. Their engineer is working part time with FASSI UK & our Main Dealers to ensure the essential technical and administrative requirements for NSSTA are met for as many types as possible. A central administration system will be put in place to keep on top of base vehicle changes affecting our approvals for the benefit of all our dealers & authorised installers.

To obtain this amount of NSSTA’s is a massive challenge for the whole loader crane / bodybuilding industry & will take time. Not all will be in place by October 2014 so there will be a mix of NSSTA & IVA depending on the bodybuilder & specification.

What could be the implications for the UK bodybuilders & crane installers?

Hundreds of commercial vehicle bodybuilder businesses are under threat if they do not adequately prepare for Whole Vehicle Type Approval. According to the Society of Motor Manufacturers and Traders (SMMT), small and medium-sized businesses could shut down overnight if they are not already acting to meet the complex new legislation, reducing capacity by up to 50%.

NO TYPE APPROVAL = NO REGISTRATION of the completed vehicle.

What is a type?

The type follows the base vehicle manufacturer so for instance there are 6 types for Scania:

So if you multiply this by the number of manufacturers you see that there are a large number of types if a bodybuilder wants to cover all possibilities with NSSTA (and some manufacturers have over 20 types!).

What does WVTA actually effect?

The poster below is produced by IVECO and gives a clear summary of technical requirements falling within the scope of Whole-Vehicle Type Approval. In essence, all these items must meet the requirements of a stated or particular EC directive. Any chassis equipment supplier making changes or alterations to these as a result of their role in the crane installation or bodybuilding process must ensure these changes fall within the requirements of the directive and have been approved. 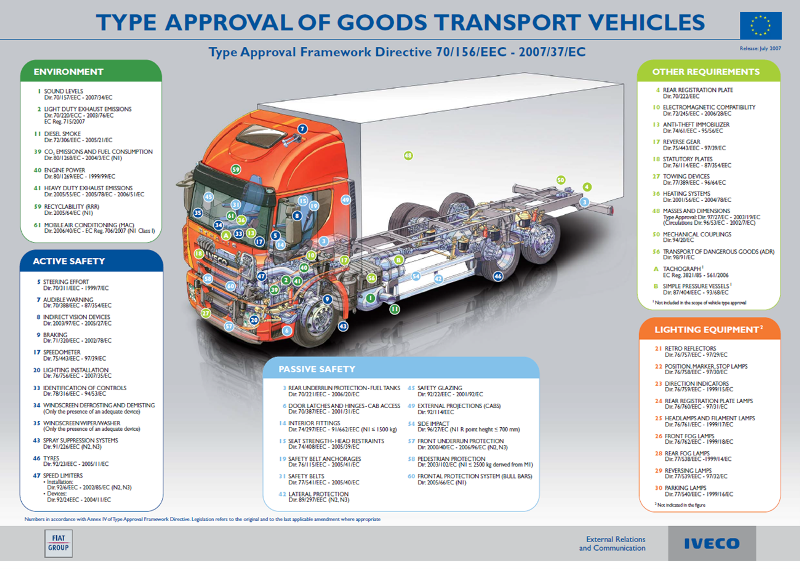